Introducing Wojtek, the Syrian brown bear who bravely fought alongside the allied forces in the Second World War. Born in 1942, Wojtek was bought by a group of misfit Polish soldiers who were evacuated from Soviet Russia. They had found him wandering all alone in an abandoned train station, and had taken a liking to the friendly bear cub. They decided to adopt young Wojtek and promptly enlisted him as a soldier with the rank of private in order to pay for his rations and transportation. Word of the grizzly trooper soon spread, and Wojtek was promoted to the rank of corporal. 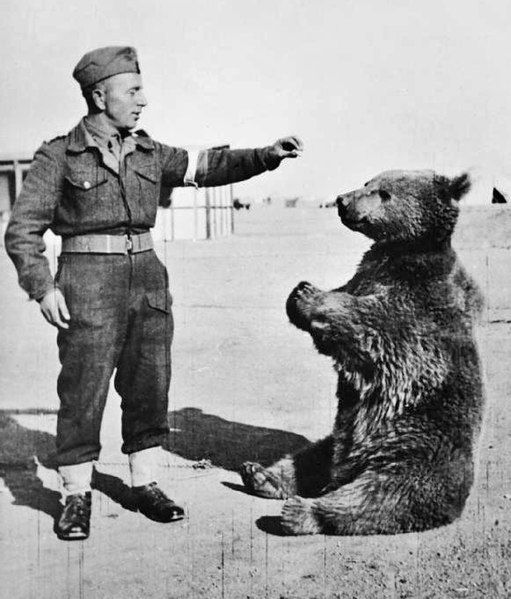 Wojtek was welcomed into the 22nd Artillery Supply Company, where the soldiers there nurtured him, feeding him milk from an old vodka bottle.  He was given fruit, honey, marmalade, and even beer, which surprisingly became his favorite drink of choice. Brought up by humans, Wojtek was remarkably civilized. He would drink coffee in the mornings; sleep alongside his fellow soldiers, keeping them warm in the cold winter nights; and even salute when he was greeted. Yet his real moment of glory came at the Battle of Monte Cassino, where he helped his unit transfer supplies and ammunition, carrying boxes that would ordinarily require four men to handle. Several confused British soldiers would later recall a bear transporting crates amidst the chaos of the battlefield.

Once the battle was over, Wojtek was celebrated as a hero. In recognition of his bravery, the 22nd Artillery Supply Company adopted a depiction of a bear carrying an artillery shell as their logo. Yet there is more to Wojtek’s legacy. After the war, Wojtek lived with his brothers in arms up until the 22nd Company was demobilized. He then retired to the Edinburgh Zoo in Scotland, where he quickly became popular amongst local civilians. Adored as he was, the soldiers of the 22nd Company would often pay him a visit and feed him his favorite snacks. Wojtek passed away in 1963 at the age of 21.  In celebration of his life, several memorials were erected in his memory across the world.