Who doesn’t love a good red velvet dessert? It’s a classic crowd-pleaser that tastes AND looks amazing. For those of you who might be living under a rock, red velvet cake is a light chocolate cake with cream cheese frosting (or sometimes ermine frosting, considered its traditional frosting) well-known for its distinct dark red color. But how did red become this cake’s trademark, you may ask. Keep reading to find out.

Despite little evidence, It is widely believed that the red velvet cake originated in the South. And while we may not know exactly where it originated, the cake’s history can be related back to the Victorian era. In the mid to late 1800s, “velvet” cake was a term used to describe cakes served at fancy parties. With cocoa powder becoming more popular, bakers started using it instead of chocolate for the aforementioned “velvet” cakes, and it was then that they discovered that cocoa powder produces a faint red color when mixed with an acidic ingredient (like vinegar or buttermilk). Besides, cocoa powder breaks the flour, giving the cake a softer, velvety texture. However, with the outbreak of WW2, ingredients like sugar and butter were rationed. In an effort to preserve the red color of the cake, bakers came up with a creative solution: beetroots. Not only did the vegetable produce the desired red color, but it also made the cake softer. 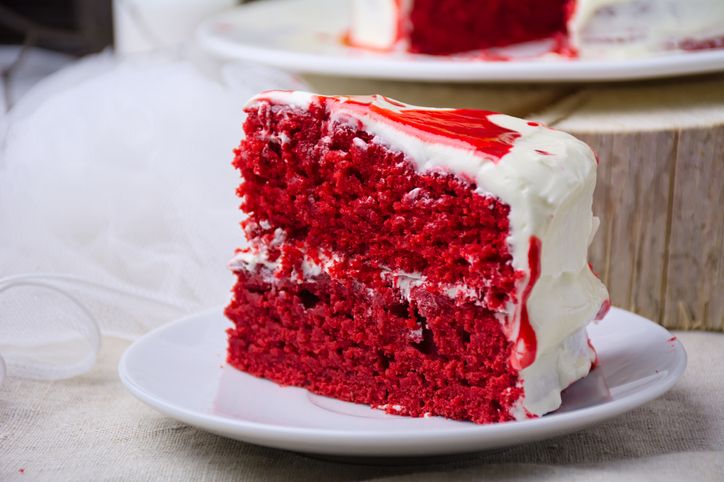 Now, rewind a couple of years back to the Great Depression for another theory of how velvet cakes became to be red. It was during that time when the Adams Extract Co, started selling red food coloring. Their marketing strategy advertised recipe cards for red velvet cake, which featured the company’s red food coloring. Indeed, food coloring is the main ingredient behind the cake’s scarlet color to this day, providing the cake with the bright red color as it is known today.

What started off as a light red hue, has evolved into an unmistakably distinct red cake, increasing the cake’s overall appeal. However, if you prefer an all-natural red cake, go ahead and try making it with beetroots. The internet is filled with recipes for it. Happy Baking y’all!