January 27, 2018 marks the fourth Saturday of January, which in Japan means the annual Wakakusa Yamayaki festival is set to begin. Set just behind the vibrant Japanese city of Nara Park, the ceremony can be traced back for hundreds of years, and its symbolism to the citizens of Japan remains just as important today as it did generations ago. An extinct volcano is the setting for this mesmerizing spectacle, and its 350 meter peak is commonplace for city-wide views all year long.

Over time, the yearly celebration has shifted to more of a traditional observance of the New Year; however, it is believed that the true origin of the event originated from boundary disputes between the temples situated on Mt. Wakakusayama. Allegedly, after meditations failed to divide the lands fairly, the mountain was set ablaze in act of rebellious defiance. 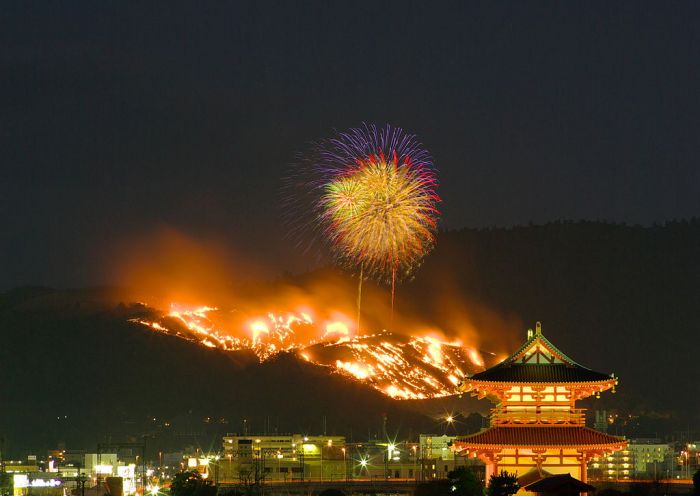 During this ritual celebration, locals and tourists alike come to gather at the base of Mt. Wakakusayama and watch as a single torch is used to ignite the mountainside. A carefully controlled flame is then carried down the mountain, passing over many ancient temples and shrines. Once the mountain is fully illuminated, some 200 fireworks are fired off in succession, creating a display that is as beautiful as it is powerful.

Many smaller events are held throughout the day to bring the entire community together before, during, and after the fiery celebrations. While the origins are disputed and may stem from heated and unfriendly confrontation, today there is a much different ambiance to the festival. It’s a glorious celebration of life and love, and often enjoyed surrounded by friends and family.