One of the most famous and beloved American pastimes has got to be the carnival. Throughout the 19th century, these traveling amusement shows were enjoyed across the country. Today, this tradition still lives on and is a favorite activity of families everywhere. Among the many things one can enjoy at a carnival are exciting amusement rides, delicious food vendors, and games of luck and skill with plenty of prizes at the end. Sometimes there are even animal exhibits and thrilling circus acts. Basically, there’s something for everyone. However, one thing that pretty much all of us enjoy is the special treat of cotton candy. This sugary delicacy is a must-try while at a carnival and has come to be a symbol of these traveling fairs. These days though, cotton candy is also commonly found at food courts in malls and at local street fairs. But what is the history behind this beloved treat?

While cotton candy is super popular in America, its origins trace all the way back to the Renaissance era in Italy. At the time, chefs would melt and spin sugar manually to create candy. This process involved quite a few steps, such as pulling the candy into thin strands using forks and then draping them over broom handles. These hand-spun treats were not only incredibly labor-intensive, but they were also quite expensive to make. However, the cotton candy we all love and enjoy today didn’t actually make its appearance until the 1800s. 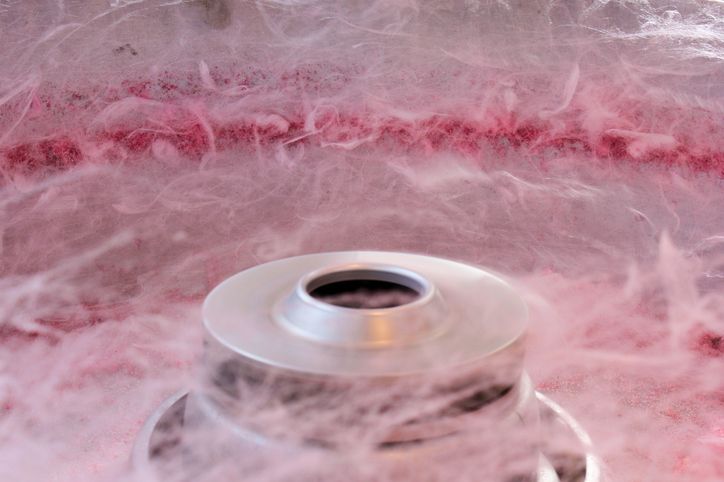 Interestingly, the person who introduced this sugary treat was a dentist named Dr. William Morrison, when he joined forces with candy maker John Wharton in 1987. The two of them invented a machine that could heat sugar in a spinning bowl, which had multiple tiny holes in it. Once in the hot, spinning bowl, the sugar would caramelize and stream through the holes, turning the melted sugar into light fluffy strands. The two inventors dubbed this sweet treat “Fairy Floss,” and in 1904, they debuted it at the St. Louis World’s Fair. Over the course of six months, 68,000 boxes of Fairy Floss were sold for 25 cents each – $6.75 in today’s currency. The treat was so popular that one candy store purchased the original electric machine and shortly began selling its own fairy floss. Ironically, a New Orleans resident named Joseph Lascaux, also a dentist, invented his own fairy floss machine and began calling the product “cotton candy.” Needless to say, the name stuck. In 1949, Gold Medal Products produced the first batch of factory-made cotton candy, and the rest is history!