Heading into Evander Holyfield and Mike Tyson’s second battle (which was billed as “the Sound and the Fury”), tensions were pretty high. Holyfield and Iron Mike had fought seven months prior in Las Vegas. Tyson had just won the WBA Heavyweight Championship, snatching it away from Bruce Seldon in an impeccable first-round knockout. Going into the fight, Holyfield was perceived to be the underdog, this even though he himself had won the championship. Yet his performance in all the fights leading up to the Tyson fight left much to be desired. And though it commonly held that these years were in no shape and form Mike Tyson’s prime years, he was still an incredible force to be reckoned with and one of the division’s most ferocious competitors. To everyone’s surprise, Holyfield knocked Tyson down in the 6th round, and referee Halpern stopped the fight in the 11th. Holyfield had done the impossible. 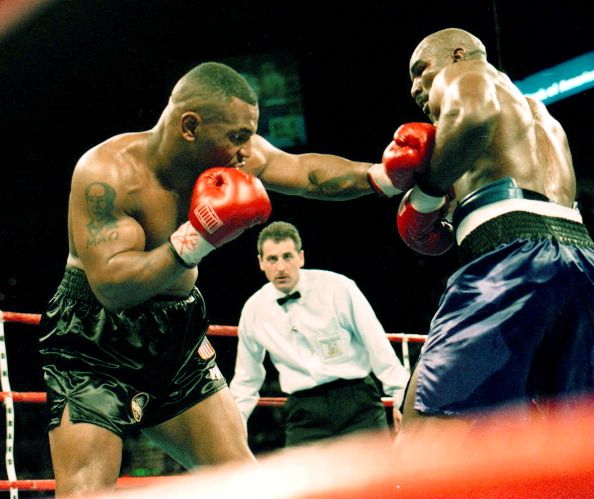 Tyson, naturally, wasn’t too thrilled about the whole thing. To make things worse, the rematch began with Holyfield pretty much dominating Tyson for the first three rounds. It was the second round when Tyson tried to swing for Holyfield’s head, only for Holyfield to dodge the punch and headbutt Tyson. The move cut Tyson bad, and Tyson bled profusely from the area above his right eye. In later interviews, it was revealed that Tyson had complained about headbutting not only in the second round but in the first, too.

It was the third round when Tyson launched a furious assault at Holyfield, who managed to get in close and clinch Tyson in retaliation. To this Tyson replied by biting off a piece of Holyfield’s ear. Despite Holyfield writhing in pain and the referee’s original decision to instantly disqualify Tyson, Holyfield’s corner insisted that he could keep fighting. Two points were deducted from Tyson, who went on to bite Holyfield’s second ear. The match was eventually halted, and Tyson was disqualified.