A disposable and recyclable coffee cup has been introduced into the world.  Coffee drinkers across the globe can now rejoice. It will be coming to a coffee shop near you soon, hopefully.   This most likely has a connected with the UK government’s Latte Levy initiative to get people to take steps in wasting less coffee cups, such as charging extra for the cup, similar to the plastic bag movement.  Re-usable cups increased over 500% in certain store in recent months, and these numbers should not be taken lightly.

A Suffolk based company named Frugalpac has decided to take the concept of eco-friendly coffee even further. They have launched an entirely disposable and recyclable Frugal Cup. The CEO and founder of the Frugalpac company, Martin Myerscough has approached large coffee companies like Starbucks in the aim of getting them on board with this eco-friendly alternative.

Myerscough expresses that although it been a long ride, that he does believe that the public will be ready to take part in this initiative for the betterment of the planet. He also expresses his will to make a difference but putting an end to all of the unnecessary waste going on, in the UK at least for now.

The main issue that coffee cups present for the environment is that at most coffee shops at least, the cups that they use for take-away coffee is made from a combination of plastic and cardboard. These materials are not separable by most recycling facilities, and therefore are not able to be recycled.

The disposable recyclable Frugal Cup in comparison however is made from recycled cardboard and can be recycled by an recycling facility in the UK.  It consists of an additional waterproof plastic liner that is not present in regular coffee cups. This material makes the cups easily separable while being recycled.   Myerscough is very confident that this recycling process is the answer to fixing the severe waste issue.

Myerscough explains that consumers who are taking coffee to-go are looking for the fastest, most efficient way to drink coffee. A takeaway cup is designed for the purpose of being taken away. Consumers will not walk any extra distance to find a special recycling bin.  The secret is to make it as easy as possible for coffee drinkers to do the most eco-friendly, right thing, was is exactly the service that the Frugal Cup provides.

At the moment, Frugal Cups are being tried out at Sheffield University as well as other independent coffee shops such as the The Colombian Coffee Company at the London Borough Market and at Paddy & Scott’s in Sufflok. You can expect to see many more of these innovative coffee cups in the next few months. 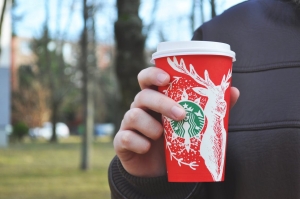