From its long, rich culture to its hearty cuisine, South Africa is truly a gem for travel lovers. In recent years, the country has become an increasingly popular tourist destination on account of its stunning natural landscapes, which draw in millions of people from around the world, as well as adventurous locals. One such natural area is Boulders Beach, a beautiful shoreline just miles away from Cape Town which is inhabited by a unique population: a colony of adorable penguins. South Africa probably isn’t the first place most people think of when they envision penguins in their natural habitat. But thanks to these penguins, Boulders Beach has become one of the number one day trip destinations from Cape Town, the country’s second-most populous city.

In 1982, a colony of African penguins settled on the shores of Boulders Beach. Over the next four decades, this charming seashore would become South Africa’s top tourist attraction, a status it maintains until today. Beachgoers will be delighted to find that there are around 3,000 of these beautiful birds roaming around the beach. The ability to interact with them made even more precious by the fact that this species is on the verge of extinction. For this reason, Boulders Beach is under the protection of Cape Nature Conservation, which ensures that the penguins can roam around freely in their natural environment. A great observation spot can be found at Foxy Beach, thanks to its boardwalks that take visitors just meters from the birds. 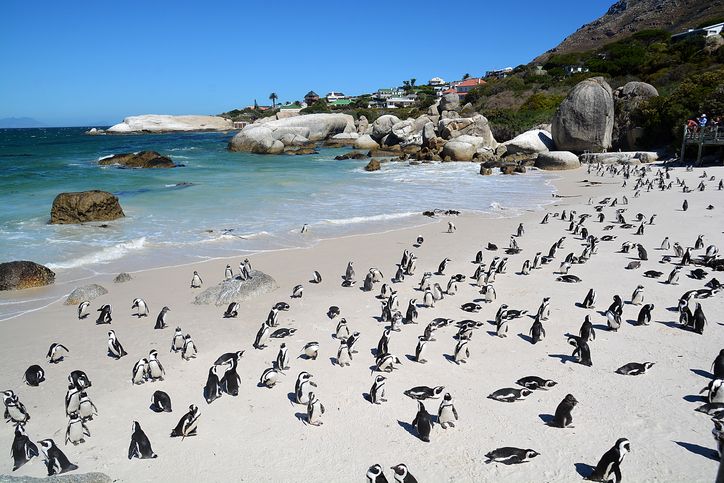 Situated merely an hour out of Cape Town, Boulders Beach is definitely one of the best day trips from the city, with easy access by car or train. The daily entry fee is priced at around $10. The park informs visitors that it’s best not to come too close to the penguins or try to feed them. Like all wild animals, they can be pretty unpredictable. However, looking from a safe distance is well worth the experience.