- William Wordsworth
The Art of Sushi
Sushi may appear to the untrained eye to be just a little ball of rice with a piece of raw fish on top, but there is much more skill involved in producing sushi than first appears. Sushi is regarded as a real art form in Japanese culture since both its beauty and flavor are significant. Sushi needs to be the proper hue, taste, and texture. And as many people have discovered after seeing movies like Jiro Dreams of Sushi, mastering the art of creating sushi can take years or even decades. [capt
Read More
What Is Flamenco?
In its purest definition, flamenco (pronounced [flameko] in Spanish) is an art form derived from the numerous traditional music traditions of southern Spain. It was created within the gitano subculture of the area of Andalusia and has a long history in Extremadura and Murcia. In a broader sense, the phrase is used to describe a range of both traditional and modern musical genres that are distinctive to southern Spain. The gitanos of the Romani ethnic group, who made great contributions to its de
Read More
The Science Behind Comfort Food
Comfort food is a term used to describe foods that provide a sense of emotional well-being and satisfaction. These foods are often high in sugar, fat, and carbohydrates and can include items such as macaroni and cheese, pizza, and ice cream. The science of comfort food is a complex field that involves understanding the psychological, physiological, and social factors that influence our food choices. One of the key psychological factors that influence our comfort food choices is our em
Read More
Exploring The World Of Plant-Based Eating
Plant-based eating, also known as a vegan or vegetarian diet, is a way of eating that focuses on consuming foods that come from plants, such as fruits, vegetables, grains, legumes, and nuts. This way of eating has gained popularity in recent years due to its numerous health benefits and its potential to reduce the environmental impact of food production. One of the main health benefits of a plant-based diet is that it is rich in vitamins, minerals, and antioxidants. Plant-based foods are natural
Read More
Top Spotify Artists of 2023
So far 2023 has been an exciting year for the music industry, with many incredible artists and bands emerging from all corners of the world. Spotify has become a go-to for discovering new and innovative music, and as such, many of its top artists have been setting the bar for success. This list of the Top 10 Spotify Artists of 2023 highlights some of the biggest names in music today. Whether they’re genre-bending icons or trendsetters, each artist has found success in their own unique way and
Read More

The United States women’s national soccer team proudly represents us in the international women’s soccer arena. The team is the most successful international women’s soccer team, having won four Women’s World Cup titles including the first-ever Women’s World Cup in 1991. They have also won four Olympic gold medals including the first Olympic women’s soccer tournament in 1996. They’ve also won eight CONCACAF Gold Cups. From 1991 to 2015, they have placed in every World Cup and Olympic tournament. FIFA Women’s World Rankings placed the U.S. women’s team at No. 2 on average from 2003 to 2008. The team has ranked No. 1 consecutively from March 2008 to November 2014. But the team has come a long way and there are plenty of moments to look back on in USWNT history.

Title IX changed the path of women’s sports. On June 23, 1972, President Nixon signed Title IX of the Education Amendments into law. As more girls began playing sports in school, schools began to invest in girls’ and women’s sports. By 1985, the U.S. Soccer Federation joined a small list of countries to create a women’s national league. 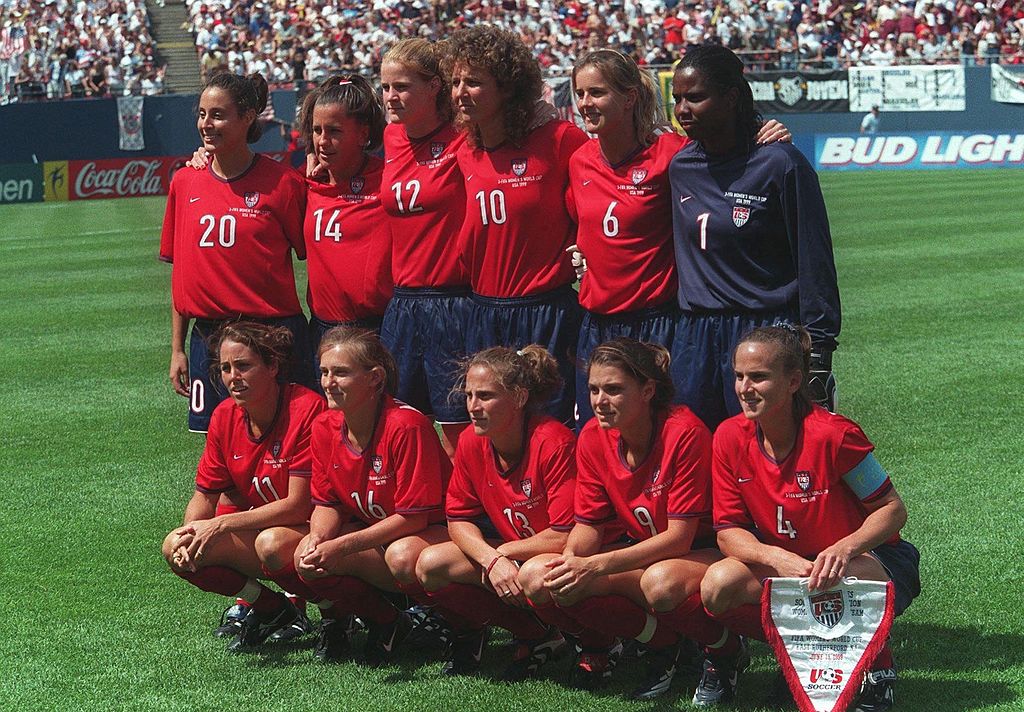 The soccer legends who became known as the Fab Five came together on the field for their first game in 1987. Teenagers Mia Hamm, Joy Fawcett, and Kristine Lilly played in Tianjin, China. The next summer, Brandi Chastain and Julie Foudy joined the team. And for overly nearly two decades playing together, the Fab Five won two Women’s World Cups and two Olympic gold medals together. These women set the United States soccer team up for success.

FIFA held the first official tournament in China in 1991. They won the first ever women’s world cup! The U.S. took home the trophy with a 2-1 win over Norway in the final. This win set the precedent for their future years as power players. They then went on to win the first ever Olympic gold medal! They defeated China with a score of 2-1 in the final. Over 76,000 fans watched the game from the stadium, a record-settting crowd for women’s soccer at the time.

What is known as the “save heard ’round the world,” U.S. goalie Hope Solo made one of the biggest plays in an Olympic game. With just five minutes remaining, Japan’s Mana Iwabuchi tried to score in Solo’s post, but the goalie dove and forced the ball away with both hands.

These moments and so many more are what set the U.S. Women’s Soccer Team apart as true champions of the sport.