The motto that nothing is impossible does not just go for sports. Once you hear about Pigcasso, the 204kg, 450 pound pig who is an acclaimed painter, you will never think twice about impossible.

Joanne Lefson, a South African animal-rights activist adopted this very special pig after taking her from a very gruesome and unfortunate situation at the slaughterhouse a few years ago.

Lefson took the pig to her own farm and provided her with several items to keep the pig entertained.  One of the items she was given was a paintbrush. How Lefson thought to give a pig a paintbrush is besides the point.

The pig became incredibly intrigued by the paint brush that she completely ignored all of the other items given to her. Lefson decided to leave paint and canvas out for her to see what she would do with it. And believe it or not, the pig began to paint! 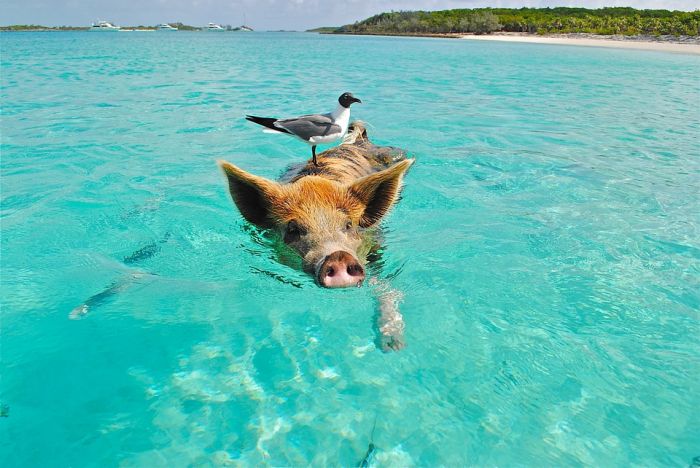 This is exactly where she developed her new name, Pigcasso. She absolutely adores dipping the brush into the paint and taking it carefully over her canvas. Her impressive talent and passion for painting has scored for her a personal gallery. The gallery is located at her home in the animal rescue farm. What’s even more shocking is that art collectors are willing to pay prices such as $2000 to get an a piece of Pigcasso’s original work.

It has been a challenge to get to paint regularly and keep up a full stock in her gallery. Lefson told news reporters that she paints at her own direction, and that she will never force Picgasso to paint.  Lefson explains that when they take a picnic basket out with them, Picgasso loves caramel-coated popcorn and fruit summer fruit as she takes painting breaks. This is not your every day pig, who as Lefson describes, has an expressionist style of art.

Pigs are very big on exploring and are a curious breed. If they are not on a farm and are in a more domestic setting, then they require entertainment and enrichment to prevent getting bored.  If an animal becomes too bored, they can become quite destructive and unhappy. However balls are usually used to entertain pigs, rather than paint brushes.

Similar to most other animals, pigs are dichromats in their eye sight. This means that they have two types of light-receiving cones in the eyes, while humans have three, known as trichromats. Therefore pigs are not able to see the color red and have fewer shades of blue and green in the eyesight in comparison to humans.

At the moment, Pigcasso is the only pig that paints. Lefson has high hopes that her prize pig’s success will inspire other pig owners to give their pigs a chance to excel and explore their talent.  She stresses that animals deserve more than their common slaughterhouse fate, and also hopes that world renounded galleries will display her Pigcasso’s article.