- Robert Bridges
The Relationship Between Music And Fashion
The relationship between music and fashion has a long and complex history, with the two industries influencing and shaping each other in a variety of ways. Music and fashion have always been closely associated, with musicians and performers often setting trends and influencing fashion choices. The fashion industry, in turn, has been a major source of inspiration for musicians, with many artists drawing on fashion to create unique and iconic looks. One of the key ways in which music an
Read More
Traditional British Desserts
Dishes like tea and cake are typical in the UK, but there are so many sweeter treats that are equally worth indulging in. Whether you're looking for something refreshing yet fruity or more decadent and sweet, these six decadent British desserts will leave you in awe. Spotted Dick is a rich pudding made from dried fruit, suet, and breadcrumbs. It's traditionally served with custard - try pairing it with a cup of tea for the perfect afternoon treat! A Bakewell Tart is a classic dessert made using
Read More
The Art of Sushi
Sushi may appear to the untrained eye to be just a little ball of rice with a piece of raw fish on top, but there is much more skill involved in producing sushi than first appears. Sushi is regarded as a real art form in Japanese culture since both its beauty and flavor are significant. Sushi needs to be the proper hue, taste, and texture. And as many people have discovered after seeing movies like Jiro Dreams of Sushi, mastering the art of creating sushi can take years or even decades. [capt
Read More
What Is Flamenco?
In its purest definition, flamenco (pronounced [flameko] in Spanish) is an art form derived from the numerous traditional music traditions of southern Spain. It was created within the gitano subculture of the area of Andalusia and has a long history in Extremadura and Murcia. In a broader sense, the phrase is used to describe a range of both traditional and modern musical genres that are distinctive to southern Spain. The gitanos of the Romani ethnic group, who made great contributions to its de
Read More
The Science Behind Comfort Food
Comfort food is a term used to describe foods that provide a sense of emotional well-being and satisfaction. These foods are often high in sugar, fat, and carbohydrates and can include items such as macaroni and cheese, pizza, and ice cream. The science of comfort food is a complex field that involves understanding the psychological, physiological, and social factors that influence our food choices. One of the key psychological factors that influence our comfort food choices is our em
Read More

The 22-year-old is known for environmental and social activism and he has again delivered. Jaden Smith has launched his first unisex sneaker made from vegan leather and is a reflection of the actor’s passion for sustainable fashion. Smith collaborated with the footwear brand New Balance to creat The NB for Jaden Smith Vision Racer. The sneakers are inspired by Smith’s favorite New Balance designs, the X-Racer and 1700. The kicks were designed to reflection his “unique, bold, fashion-forward aesthetic.”

They’re made from partially recycled materials for sustainability and have a chunky thick bottom with an over-sized midsole made from reground EVA foam and recycled foam, castor bean oil and virgin polyurethane all make up the insoles. Smith and New Balanced first partnered up in 2017 when he became the brand’s official ambassador. This is the first product the two have worked on together. While working on the new sneakers, the brand said Smith had a hands-on approach to working with New Balances to create a new silhouette and while learning about the creation process from design and development to manufacturing and supply chain logistics. 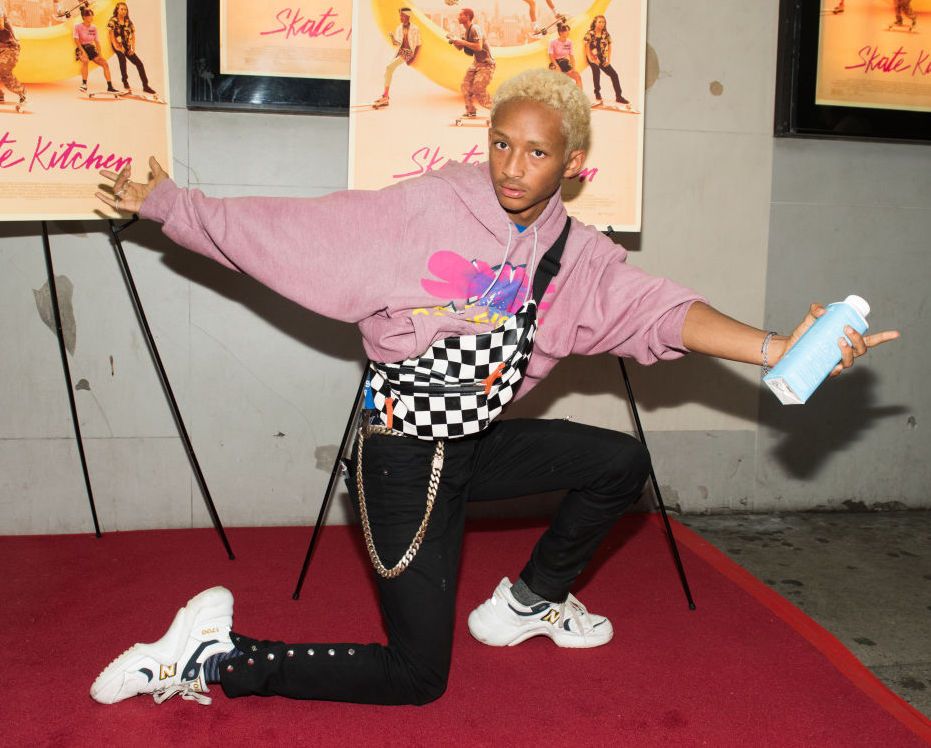 New Balances has commented on Jaden’s passion for sustainability and progressive fashion. Also, his appreciations for New Balance classics didn’t hurt either! “Shared values of transforming the status quo; staying true to oneself; giving back to community; and, respecting heritage while co-authoring a distinct future, are the foundation of the relationship between New Balance and Jaden Smith,” said Chris Davis, New Balance Chief Marketing Officer and Senior Vice President of Merchandising. The new shoes, the Vision Racer, will launch in a Wavy Baby Blue colorway with additional colors being added throughout the year. The sneakers will retail for $150 and will be available to buy on the company’s website and in select stores on July 24.

This isn’t the first time Jaden Smith has taken on projects in an effort to aid environmental causes. In 2015, parents Will Smith and Jada Pinkett Smith helped found JUST Water. The company sells responsibly sourced water from upstate New York and packaged in a bottle made of 82% renewable resources. Smith was motivated to make a difference and to create a company that replaced all those single-use plastic bottles with something more sustainable. “I knew that it was going to be really hard to create, like, a new soda. And I knew that the recipe for water all over the world is pretty much the same and it was going to be a lot easier to create a new water bottle company than a soda company,” Smith told Fast Company in an interview. “And that’s what I wanted to do, and I was like, 12 years old.”