Cate Le Bon is one of the most enigmatic figures in indie-guitar music today. Her cryptic, sparse, evocative, and hermetical lyrics leave an incredible amount of imagining to do and blanks to fill in. Her all-around evasive figure has made her one of the most interesting active singer-songwriters around, so we took the time to dig into her biography. This is a small peak into the incredible career of Cate Le Bon. 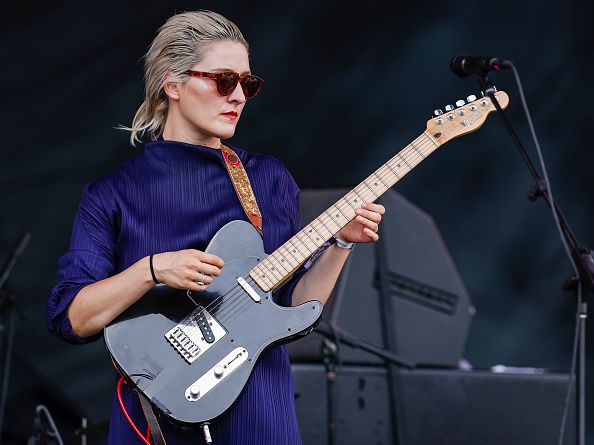 Born Cate Timothy on the 4th of March 1983 in Penobyr, Carmarthenshire Wales, Le Bon first garnered the attention of the public when she supported Super Furry Animals’ Gruff Rhys’s 2007 solo UK tour. It was then that she appeared as a guest vocalist on Neon Neon’s 2008 single “I Lust U”. That year, Le Bon released her first official titled ‘Edrych yn Liygaid Ceffyl Benthyg’, which, translated from Welsh, roughly means ‘Looking in the eyes of a borrowed horse’, a Welsh expression similar to the English ‘looking a gift horse in the mouth’. That same year, she continued to work with Supper Furry Animals associates, before releasing her debut album ‘Me Oh My’ in 2009.

Since then, Le Bon has worked with such notable names as John Cale, John Grant, Josiah Steinbrick, and others. Le Bon was once described by critic Laura Snapes as “a ringleader who’s prepared to stake out uncertain territory. Le Bon always keeps you guessing, making the old traditions of guitar-oriented rock feel arbitrary, too. Her nervy assessments of the world are filled with equal parts suspense and heart, and beautifully zany riffs, where the feeling of being frayed by uncertainty comes together into a strangely comforting patchwork.” Jeff Tweedy, lead vocalist and songwriter of Wilco once stated that Le Bon was “one of the best out there making music now.” He hasn’t been the only one to voice that sentiment.