Arecent study conducted a stimulation using virtual reality in order to explore the how the memory assembling process in our brains work.

Researchers in charge of the study took a close look at the activities occurring in the hippocampus area of the brain while study participants remembered memories from a virtual reality experience.

Researchers have decided to use virtual reality technology in order to explore deeper the process of how memories are assembled in our brains, and how we organize these memories within context.

Another study that was published in the Nature Communications Journal had placed volunteers into a virtual reality experience and observed what was occurring in their hippocampuses.  The researchers were able to conclude from their work that various types of memories are activated by different parts of the hippocampus.

Research conducted at the University of California looked specifically at how the brain organizes memories in relation to time context as well as space. This was done by putting study participants in a virtual reality experience.

Following this, they used fMRI with the aim of seeing what was happening in the hippocampus at the same time that the participants were experiencing memories of the specific experience.

The virtual reality experience ”took” subjects into different homes, each of which had various objects inside.  They attempted to memorize the objects in two different contexts. One, which was video (episodic memory), and the other, which was the house (spatial memory) and they saw what specifically activated specific regions of the hippocampus.

This study revealed to the researchers which area of the hippocampus is involved in recalling shared information in relation to contexts. For example, virtual objects that appeared in the video.

They were also able to identify which area specifically was responsible for recalling differences in context.

Their research even contradicted previous belief that the hippocampus is mostly in charge of spatial memories, and found that it is in fact more responsible for episodic memories which are related to space and time.

This study is a wonderful example of how virtual reality technologies can be helpful and applied to medical and physiological research.

There are already existing virtual reality systems and have been specially designed for medical students to study with more realistic materials.

The future of hospitals and operating rooms may very well be equipped with a virtual reality training room in the near future.

Virtual reality systems could additionally even allow surgeons to gain more access to the area they will be operating on prior to a complex procedure.

This innovative technology could be used as a very helpful tool for the betterment of mankind, where doctors have the ability to have a 3-dimensional look at patients bodies that would otherwise not have been seen. 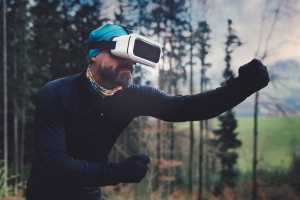 You may also like
The Flower Farm In Tasmania
There are many places in the world where one can go to see all sorts of flowers in their natural habitats. From roses to hydrangeas, there are specialty gardens devoted to every kind of flower under the sun. However, if you're especially fond of tulips, you're probably going to love this news. Apparently, there is a farm in North Tasmania devoted entirely to tulips, and it's pretty much the most Instagram-worthy experience ever. Usually, when people think of tulips, the first place that c
Read More
The Origin Of Cotton Candy
One of the most famous and beloved American pastimes has got to be the carnival. Throughout the 19th century, these traveling amusement shows were enjoyed across the country. Today, this tradition still lives on and is a favorite activity of families everywhere. Among the many things one can enjoy at a carnival are exciting amusement rides, delicious food vendors, and games of luck and skill with plenty of prizes at the end. Sometimes there are even animal exhibits and thrilling circus acts. Bas
Read More
The Perfect Wedding Surprise
When a young couple gets married, it is perhaps one of the most important days of their lives. The experience is full of many memorable moments, from the bachelorette party to the traditional ceremony, to the bouquet toss. One moment that is particularly unforgettable is the couples "first look," when the bride and groom see each other for the first time on that special day. This moment is always full of emotion for several reasons. First of all, the bride looks radiant in her dress and hair and
Read More
Disneyland Paris Is Building One of the Largest Solar Plants in Europe
Disneyland Paris is building one of the largest solar plants in Europe. When completed, it will power 17% of the resort and reduce greenhouse gas emissions by more than 750 tons of carbon dioxide per year! The solar plant began construction in July, the theme park announced last week. The panels are being installed as a canopy over the Disneyland Paris parking lot. The canopy shade will protect visitors and their cars from the sun or rain, as it will also have a fun Disney twist. The project is
Read More
Taylor Swift’s ‘Folklore’ Becomes First Million-Selling Album of 2020 in U.S.
When Taylor Swift dropped her surprise album over the summer, the world lost its mind. Folklore is Swift's ninth album and has returned to No. 1 on the Billboard 200 chart for an eighth non-consecutive week (on the chart dated Oct. 31), it also becomes the first album to sell a million copies in the U.S. in 2020. Folklore’s total album sales jump past 1 million, making it the first album to sell a million copies in 2020. It’s also the first album released in 2020 to sell a million. Maybe not
Read More
TMT Live Preview
geoedge-origin-div
gesource
geparentscriptid
getagid
bidswitch.net%2Fpreview
riskiq