Beard Evolution: What Can Hipsters Learn From Monkeys?
Tess Murray

Did you ever think that monkeys can teach us about beard evolution? Probably not.

Human verbal communication is in fact influenced by the way our face looks, an entire sixty percent of it to be exact.  What can we take from this and what it says about the latest hipster trend to grow big, full beards?

Large amounts of facial hair, including bushy eyebrows, mustaches and beards evolved initially in primates in order to assist them in recognizing each other in environments such as the forest.  James Higham, an evolution and ecology specialist explains that primates are a very visual group and have mostly face to face interactions.  The history of the evolution of primates has more and more of a dependence on vision, rather than olfaction (sense of smell) that was used more among mammals in the past.

As an example, the Guenon type of monkeys have many different colors of facial hair, both female and males. Each one of the over 24 types of species have their own specific and distinctive facial masks. Scientists have aimed to discover what about evolution has made those traits come about. In 1980 the Eigenface computer facial recognition algorithm came about in order to get an idea of what age, gender and species were in specific photographs. In the end the computer was not able to decipher between females and males, or even determine their age. However it could very well tell which species was in the photograph.

Scientists believe that by inhabiting with a social group that is stable, and if you recognize a person, then you can therefore associate their age and gender to them, even without their face.   But if you were to live in a rain forest canopy with other similar specifies, then you would only need to recognize those that are the same kind as you for purposes such as breeding. 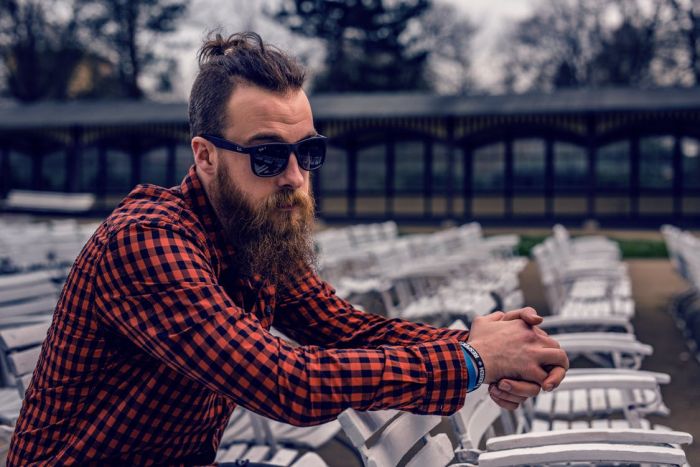 So this is where the ultimate question comes up, are hipsters potentially aiming to stand out as a different species? Do they view the big city as their jungle?  Most likely, not really. Even though when it comes to monkeys, females and males look extremely similar, it is still possible to very easily differ between men and women when it comes to humans. Especially so when a man has a beard. In our modern society, facial hair has become more of an attractive trait rather than one used in order to identify people.

Beards and mustaches on humans are known to be sexually differentiating traits, meaning they are only seen in males. They most likely do play a certain role in sexual selection as well as competition within individuals of the same sex.  Some studies show that men’s facial hair does in fact protect certain sensitive facial areas during an event such as a fist fight, which explains why boxers must be beardless. Although a human beard very unlikely provides the same type of protective abilities that a lion’s does.

Several studies have revealed that women in fact relate having a beard to being more masculine and having more testosterone.  Bearded men were rated as more dominant, protective, trustworthy, healthy, and overall more masculine. It is important to note however, that note all beards are related with positive traits. Some opposing studies have shown that people related beards with being aggressive, less caring, less generous and less cheerful.  Despite these findings, our good old friend Charles Darwin, the bald guy once said that our ancestors evolved beards due to female desire, believing that it made men appear to be more attractive and masculine.

This was the popular belief, up until an Australian research time made an announcement in 2014 that beards had in fact reached their peak. They had become the norm.  Based on Darwin’s findings, the more rare a trait is, the more desirable it comes.  Hipsters brought our society to a new limit, and made beards less attractive.  Throughout evolution, facial hair trends have changed, but the latest is big bushy beards.  A noteable professor has even suggested that the 2008 financial crisis might explain the sudden boom in hipster beards. Young men maybe needed to claim their masculinity and become attractive regardless of their work situation.

You may also like
The Missouri Home With A Working Jail
Many young couples are out there looking for their first home, and they certainly have some unique options to choose from. In recent years, some seriously interesting real estate opportunities have been popping up on the market, including haunted houses, tiny homes, and an actual castle - yes, with a moat and everything. Just recently, one Facebook user posted a real estate listing for a two-story house in Fayette City, Missouri that just happens to come with its own fully furnished nine-cell ja
Read More
The Swiss Town With Chocolate Snow
When we think of Switzerland, we often think of two things: snow and chocolate. However, we don't usually think of the two together. And yet, that is exactly what we'll imagine from now on after a recent news report. Just a few days ago, there was a small accident at Lindt & Spruengli, a chocolate factory located in the Swiss town of Olten. Apparently, several factors, including a faulty ventilation system as well as high winds, led to a large amount of chocolate powder being dispersed throu
Read More
The Highway That Runs Through A Building
There’s no doubt that Osaka, Japan has one seriously impressive skyline, and that the Gate Tower Building is a significant part of making it that much more unique with a functional highway running through it.  Yes, you read that right, this office building actually has a highway through it, and it should come as no surprise that pictures of the structure have been going viral all over social media for decades already, since in general, as you probably could have assumed, such buildings don’
Read More
The Porcelain Dish Home
While you may think you’re a big fan of porcelain dishes, you clearly have yet to meet Nguien Van Truong, a Vietnamese man who has invested the past twenty-five years of his life filling his house with everything porcelain. Between his plates, urns, and bowls, he’s got an impressive collection of nearly 10,000 porcelain items that decorate his house and take every other collection to shame. His obsession with porcelain sparked back in 1986, after being released from the military and returnin
Read More
The Passive Yet Controversial Sport
In general, when it comes to being good at a sport, it requires a great deal of both effort and skills, whether it be mental or physical. Do note however, that we said in general. What this means is that there is always the rare exception, and that very rare exception  would be none other than Finch Sitting. Never heard of this sport? Don’t worry, most people haven’t either. It’s a Dutch sport that is mostly played in the region of Flanders, and simply requires sitting down and listening
Read More
TMT Live Preview
geoedge-origin-div
gesource
geparentscriptid
getagid
bidswitch.net%2Fpreview
riskiq