The story goes like this: it was in the second century B.C., ancient Liuyang, China when some unsuspecting fire-raiser threw an assortment of bamboo stalks into a raging flame. The fire, as if allergic to the wood it was devouring, shattered, shooting its infernal discharge sporadically, and then promptly receded back to its regular form. The hollow air pockets in the bamboo overheated, and they became the first natural firecrackers.

It was believed that these firecrackers could ward off evil spirits, and it was this belief, among other motives, that drove an ancient Chinese alchemist to mix sulfur, charcoal, and potassium, nitrate in order to create the world’s first gunpowder in approximately 600-900AD. The powder was jammed into bamboo sticks forming the first artificial fireworks in the world. These fireworks made their way across Europe throughout the 13th-15th century and were used mostly for religious festivals and public entertainment. It was only a matter of time before Europeans began to manufacture the explosive pieces of pyrotechnic entertainment themselves. 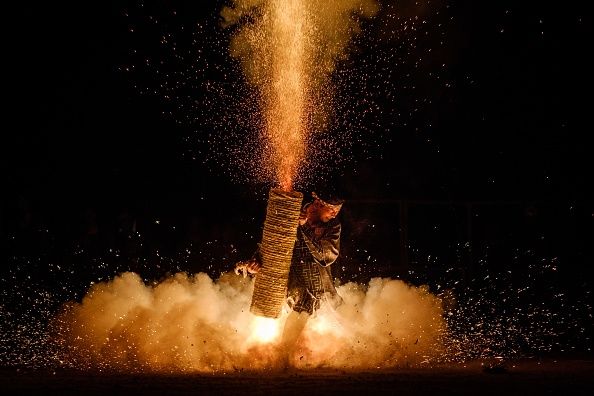 The first British colonists who inhabited the U.S. brought their love of fireworks along with them for the journey. The New World became a sort of fireworks laboratory, with Independence Day celebrations becoming almost synonymous with lighting up the sky with fireworks, which was very much John Adams’ intent, given that he hoped July 4th would be celebrated “with pomp, parade, bonfires, and illuminations from one end of this continent to the other.” 250 years after he had voiced his optimistic expectations, we can safely say that Adams’ dream came true. As more and more local festivals and celebrations take off across the country, the fireworks industry continues to expand, which goes to show that as long as there’s something to be happy about, there’s a reason to watch the sky explode.