Is it just me, or do modern-day hipsters look a lot like middle to upper-class men circa the 19th century? Hint: it’s not just me, and the comparison is one-hundred percent based on likeness of mustache styles.

Today you can find endless amounts of mustache tools and accessories, both ironic and useful. From jewelry and candy to duct tape and bedding, it’s safe to say that ‘the mustache’ is gliding through the mainstream for the foreseeable future. Before the counter-culture hipsters took credit for the modern rise of the ‘stache, the aforementioned lip sweater has been going in and out of style for centuries, literally.

Prior to our current wave of mustache envy, the hairy trend had its biggest influence in the 70s and 80s. But, the ‘stache first made its way into contemporary culture throughout the 1800s. By this point, experts had already began creating products and innovations to lessen the burden of growing a perfectly cared for mustache. Barbers were well versed in mustache grooming etiquette, local shops sold special scissors, combs, and wax, and even the women knew how to take care of a man’s coveted ‘stache!

One particular burden for mustached men was the struggle of sipping warm beverages, such as coffee or tea, without the heat and liquid disrupting their expertly groomed facial fur. In what may be one of the *most* innovative solutions of its time, the mustache cup was invented. Enter: Harvey Adams.

Harvey was a potter based in the UK, and in the mid-1870s he took out a patent for a unique ‘butterfly shaped ledge’ that could be set inside of any standard cup. I guess you could say it was the first ‘viral’ invention, as these special cups started flying off the shelves. Even the retail giants like Sears and Marshall Fields kept their stores stocked with mustache cups. 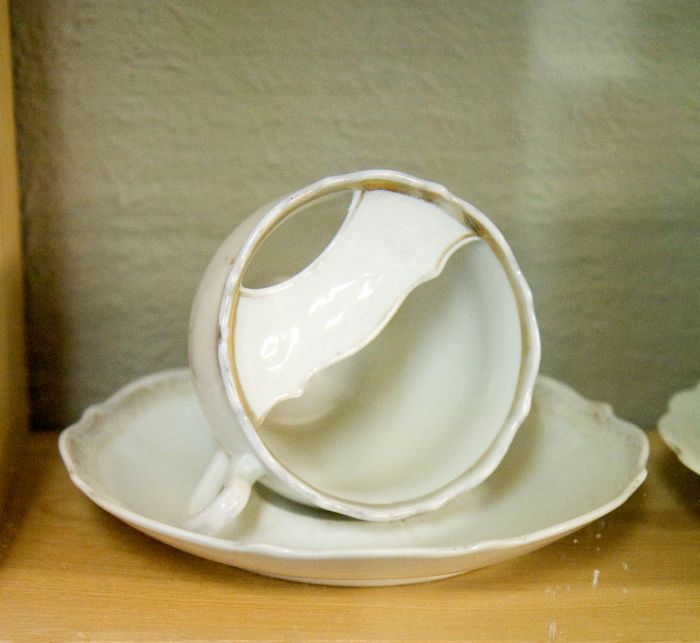 As sales grew, so did demand. The mustache cup soon became available in many different shapes and sizes, and allowed any mustache-bearing citizen to freely enjoy liquids without the added worry of any potential mustache damage.

And you thought you were hipster? Pshhhh… *eye roll*